Dolphin park in Alanya makes your holiday more colorfully by watching the most talented marine animals. Let to you family or friends live unforgettable and reminiscent moments with this 50 minunets dolphin show in Alanya where these spirituals and intelligence sea creators perform.

We organize tour to Dolphin show in Alanya twice a day. By attending this magnificent marine animals' performance it will be supreme gift for your children or lovers. You can see these sea creators at Alanya Dolphinarium, swim with dolphin or take holiday photos. If somebody would like to experience fun, memorable day, join dolphin show in Alanya recommended by us. It`ll be great presents for loved ones

sealanya,dolphinland,swimming,seapark,Marine Park,seals,performance,Dolphinarium,dolphinpark Turkey,show
The trip fee is paid on the day of the tour
Send a request, we will confirm in minutes

Dolphin Park in Alanya - Each tourist before the start of the holiday roughly makes up his program, so that on arrival in the resort city not to get lost their time before the variety of entertainment. And, therefore, we recommend to immediately include in your list a visit to the magnificent tour — Dolphin park in Alanya. After all, cute representatives of the water world love not only children, but also adults, and everyone will be interested to see an amazing show program with their participants — dolphins. Dolphins, seals, lions and other adorable creatures together under the guidance of professional trainers will show mind-blowing tricks. And for a fee, we offer everyone who wants to make an unforgettable swim with dolphins Alanya. Well, if you are worried that you do not know how to get to, where the Sea Park is located or sealanya opening hours do not worry because the cost of our tour includes transfer from the hotel and back. Delight yourself and your children with an unforgettable journey into the wonderful world of marine life. Also, our travel company offers you to visit others, no less fascinating excursions in Alanya. By contacting our representative you can learn what to do in Alanya with kids, except dolphinarium in Turkey.

Sealanya Dolphinpark trip will consist of the following points of the program in dolphinarium:

Our company organizes a trip to a dolphin park in Alanya twice a day. The dolphin show is held in the morning at 10:30, and in the afternoon - at 15:00.

WHY SHOULD YOU TRY DOLPHIN SHOW IN ALANYA WITH US?

By choosing us for an dolphin show in Alanya, we will provide a limited number of tourists (small group). You will get the best seats in the auditorium closer to the stage. We organize Alanya dolphin show twice a day which takes place in one of the biggest dolphin park in Europe - Sealanya. If somebody would like to experience fun, memorable day, join dolphin show in Alanya recommended by us. It ll be great presents for loved ones Since the show program is very popular among tourists, you can book it right now free without PREPAYMENT, by calling the number listed on the site.

What is included in the price of the Alanya Dolphin Show program?

The price of the Alanya dolphin show program includes a group transfer by an AC minibus, accompaniment of English-speaking guides, insurance, entrance tickets to the dolphinarium.

How long is the program at Dolphin Park in Alanya?

The show program at the Dolphin park in Alanya with dolphins, seals and other mammals lasts about 50 minutes. The entire trip takes 3 hours depending on your hotel or accommodation.

What days can you book a trip to the Sealanya dolphinarium in Alanya?

Can I swim with dolphins in Alanya Sealanya Park?

The dolphinarium hosts both dolphin shows and swimming with dolphins, but these are different programs. Each must be ordered separately. You can swim with dolphins at Sealanya Park in Alanya in 20 minutes.

Dolphin Park in Alanya and from city districts

Konakli dolphin show - a show from the smartest sea animals in which they show their tricks, songs, dances and drawing skills. It will be interesting for everyone.

Sealanya Dolphin park Turkler is a whole park with an area of ​​5 thousand hectares, which contains 15 pools. Here you can see an amazing dolphin show and chat with them. We have prepared transfer and entrance tickets.

Sialanya's largest marine amusement park awaits you. There you can not only watch the dolphin show, but also swim with them. We have prepared a transfer to the Dolphinarium from your hotel in Avsallar and tickets.

Dolphinarium from Incekum - excursion to the largest marine park of Sialanya. There will be an amazing dolphin show, after which you can chat and take pictures with them. Transfer and tickets have already been prepared for you.

We will pick you up and your loved ones from the hotel in Okurcalar and go to the Dolphinarium. We have prepared tickets for the largest marine park in Sialanya. Not only children, but all adults will be delighted. See details.

Dolphinarium Sialanya from Kestel-tour, from which all children and adults will be delighted. Sea animals have prepared an amazing show for you. You can swim with them, take pictures and feed.

We will take you to the stunning Sealanya Sea Park. There you will find a show program from dolphins and fur seals. If you wish, you can take a picture with them, stroke them and even swim.

Dolphin park Kargicak - We have prepared a tour to the Dolphinarium for you from Kargicak. You will visit the largest marine amusement park Sialanya. Adorable dolphins will delight anyone. You can take a photo and swim with them 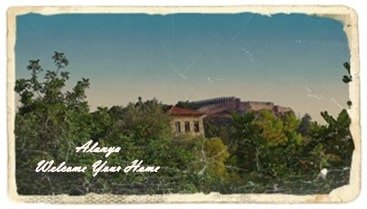 Alanya cable car with city tour is sightseeing trip. Alanya city trip and cableway, the most important excursion in this town, which is held in the be ...

Salda lake Pamukkale from Alanya tour without shops is a new activity organized by our company. On our one-day trip, you can visit several different a ...

Alanya Pirate Boat Trip one of the best activitiy tourists can do during holiday. Pirates of Alanya boat helps our guests to feel themselves among the ...

Alanya to Cappadocia Tour is the eighth wonder of the world. During the tour, you can visit the underground cities, the ancient village of Chavushin, ...

Sapadere Canyon Alanya tour it's an amusement daily trip that you can observe one of the startling nature's wonders and is organized by open Jeep. Dur ...

Dolphin Park in Alanya reviews can be read Alanya Review